A Revolution of Kindness 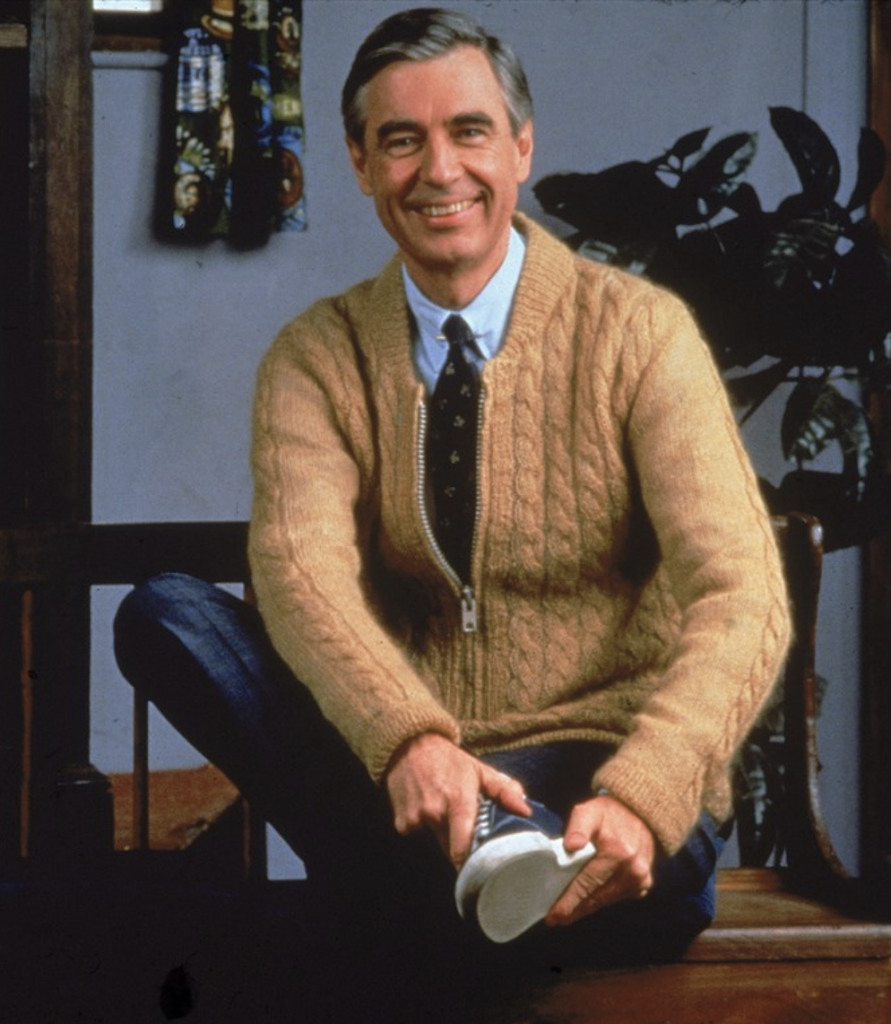 I can’t get Mr. Rogers off my mind.  I saw the documentary about him, called “Won’t You Be My Neighbor?” this week, and I can’t stop thinking about it.  It was surprisingly moving, which I half expected, given that the reviewer for the New York Times, A.O. Scott, mentioned crying at the end of it.  But I cried a lot more than that.

I grew up watching Mr. Rogers.  I did love it when I was young, but I’ll admit I haven’t given much thought to Mr. Rogers since then.  Except the time I read about how kind he’d been to a young journalist.  And every time there is a national disaster or crisis, when his words are circulated on social media reminding us (as his mother reminded him) to “look for the helpers.  There are always helpers.”

The movie makes clear that Mr. Rogers, who was trained as a Presbyterian minister, had a central guiding principle: to show each child that they are loved and lovable just as they are.  Watching him carry out the mission of showing this to each child he encountered, and watching children respond to it, was surprisingly powerful.

In particular, as a parent of a child with special needs, I found myself being especially moved when watching him encounter children with disabilities and other challenges and greeting them with this same message.  Part of what made this so emotional for me, of course, is that many people don’t treat children with disabilities or other challenges this way.  Instead, they are often treated as flawed and “other.”  Watching Mr. Rogers tell them that they were perfect the way they are sent tears streaming down my face.

The thing that especially surprised me while watching this movie, though, is how much every single person, including every single adult, longs to hear these words, that they are loved and lovable.  That they are perfect just as they are. In multiple scenes of the movie, adults discuss how hearing these words from Mr. Rogers made them feel and changed their lives.

Mr. Rogers, though he looked pretty staid, was a revolutionary.  He believed, even in the 1960’s, that children’s television programming was beneath children; that it didn’t respect them and their emotions as being as important as those of adults.  Mr. Rogers believed that “television has the chance to build community from an entire country.”  Couldn’t we use that today, when our communities feel so fractured?

The movie makes clear, however, that Mr. Roger’s times weren’t necessarily easier than ours.  He talked children through the Vietnam War, the assassination of Robert F. Kennedy, the Challenger disaster, and 9/11.  He also showed children, at a time when racial tensions were high and white Americans were worrying about swimming together with black Americans, that they didn’t need to be afraid.  He invited Officer Clemmons, the police officer on his show, who was played by a black actor, to put his feet in a wading pool with him.  Mr. Rogers met the issues of his day head on and he helped children navigate situations that they might be confused by.  In the process, he taught them about the dignity of every human being.

In the last commencement speech Mr. Rogers gave to a graduating class, he explained what he meant when he said that each child was special.  He said, “You don’t have to do anything sensational for people to love you.”  What a powerful lesson in a society that prizes achievement above nearly all else.  He also told the students, “We are all called to be . . . repairers of creation” and thanked them for “whatever you do to bring joy, light, pardon, and love to your neighbor and yourself.”

These words, too, brought tears to my eyes.  It can be such a challenge to try to bring joy and light and love into the world sometimes.  And it can, at times, feel futile.  Especially at a time when simple kindnesses can seem harder to find.  But, I, like Mr. Rogers, believe that this is how we can help to make the world more like we’d like it to be; how we can make a difference in each other’s lives.  And how Mr. Rogers made a difference in our world.

“Won’t You Be My Neighbor?” is such a wonderful movie.  I can’t recommend it highly enough.  It showed me how radical messages of kindness can be.  And it inspired me to keep working, myself, to bring kindness and love into the world, in any small way that I can.  It’s also made me consider how we can be better neighbors to each other, in small and large ways, each day.