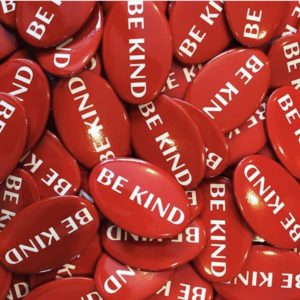 I recently heard something like: Everyone you see has a story that would break your heart if you went deep enough with them.  It is so, so true.  But because we can’t go deep with every person we see, we just need to remember that everyone is going through something.

That could feel overwhelming, if we let it.  But there’s another side to this, and that is: just by being kind, in the smallest ways, you can have an unexpectedly huge effect on someone’s day, or their life even.

I have a recent example from my own life.  My mom has been in the hospital the last few weeks.  When I was visiting her last week, a few of us who were visiting went to get coffee in the hospital lobby.  A lovely woman made me two cappuccinos (one for me, and one for my mom) and then, with a kind smile, asked if we’d like cinnamon on them.  It took me a moment to decide, because I’d never had cinnamon on a cappuccino before; but the light in her eyes told me it was a special addition.

I got the cinnamon, and it did make a difference in that cappuccino.  It was an unexpected bright spot in my day that day; one that was otherwise a bit tense and concerning.

The next day, my cousin and I went back to the coffee shop, and I was looking for the sweet woman who had helped me the day before.  She wasn’t there, and so I just got a regular cappuccino.  It was kind of a bummer after seeing the special touch that cinnamon, and the sweet woman with the kind smile, made.

The following day, I saw her again.  Raquel was her name, the woman with the kind eyes behind the coffee maker.  I ordered two of her magical cappuccinos and thanked her, telling her how special they are, and what a difference they’d been making to my mother and me.

It all was a sign to me of something I’ve long believed— that you can turn anything into an art form.  From the smallest interaction to the largest.  Literally anything can be art if you give it attention and care.

Raquel’s cappuccinos with cinnamon on top are art.  They made my day on many days when I was filled with fear and confusion.  Those cappuccinos felt like a gift from the Universe— but really they were just coffees that an ordinary woman made extraordinary with her attention.

I’ve thought about Raquel and her special coffees many times since I first met her, even now that I’m back in California, on the other side of the country from where she is.  And I’m trying to make small moments special in the same way that she does.  Trying to pay attention to what I’m doing in the moment, to the people I’m interacting with, even in the smallest interactions.  Because you never know what people are going through.  And what small kindness might make a difference in their days.